Canadian stocks have had a very decent run since the global financial crisis of 2008. From December 31, 2008, through the end of last year, the TSX Composite Index returned an annualized 10.1%. This pales in comparison to the performance of the S&P 500 Index, which has risen at an annualized rate of 16.1%. Had you invested $1 million in the TSX Composite Index at the end of 2008, your investment would have been worth $3,477,264 at the end of last year. By comparison, the same investment in the S&P 500 Index would have a value of $6,873,269, which is a stunning $3,396,005 more than the Canadian investment.

Looking For Love in All the Wrong Places

The composition of the Canadian stock market is dramatically different than that of its southern neighbor. As the table below illustrates, there are a handful of sectors which feature either far more or less prominently in the TSX Composite Index than in the S&P 500. Specifically, Canadian stocks are far more concentrated in financial, energy, and materials companies, while the U.S. market is more concentrated in the technology, health care, and consumer discretionary sectors. 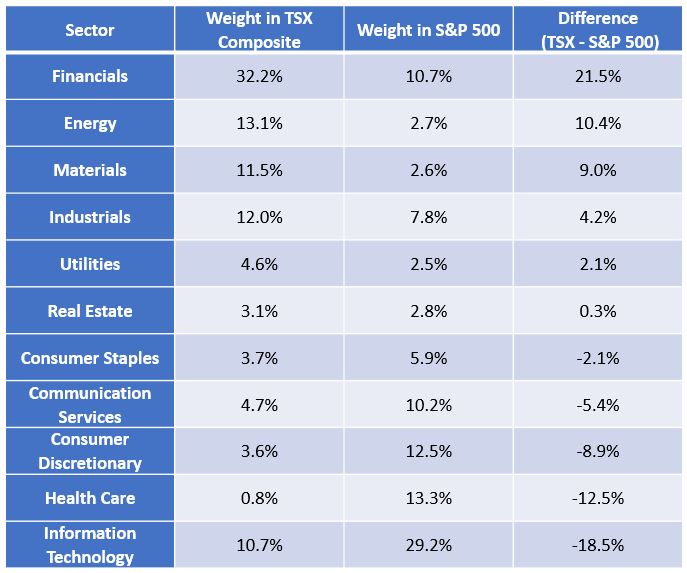 In 1980, the song “Lookin' for Love", by American country music singer Johnny Lee was released on the soundtrack to the film Urban Cowboy. The tune’s iconic lyric, “Lookin’ for love in all the wrong places”, serves as a fitting description of the dramatic underperformance of the TSX vs. the S&P 500. The majority of disparity in performance between the two indexes can be explained by their different sectoral weightings. When financial, energy, and materials stocks outperform their counterparts in the information technology, health care and consumer discretionary sectors, it is highly likely that the TSX will outperform the S&P 500, and vice-versa.

Over the past two years ending December 31, 2021, the information technology sector has been the star performer both in Canada and the U.S. Interestingly, the TSX technology index fared better than its U.S. peer, returning 113.9% vs. 92.4%. However, due to the far greater weighting of tech companies in the S&P 500 than in the TSX (23.2% vs. 5.7% as of the end of 2019), tech stocks have had a far greater impact on the returns of the S&P 500 than on the TSX. On the other hand, financial, energy, and materials stocks were all underperformers on both sides of the border, which served as a drag on the performance of Canadian relative to U.S. stocks.

Given that differing sector weightings account for the lion’s share of performance disparities between Canadian and U.S. stocks, it is essential to determine the macroeconomic factors that have historically caused certain sectors to out/underperform others, and by extension TSX outperformance or underperformance. 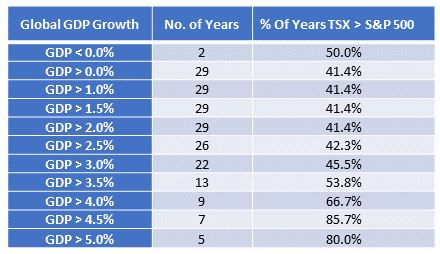 The other heavyweight champion when it comes to TSX vs. S&P 500 performance is oil, which is unsurprising given that energy companies represented a 13.1% weight in the TSX Composite Index vs. a 2.7% weight in the S&P 500 as of the end of last year. As shown in the table below, the TSX outperformed in over two-thirds of years during which oil rose by more than 10% and did so 80% of the time when oil gained more than 30%. Given that oil prices had been climbing rapidly even before the Russian invasion of Ukraine (up 56% in 2021), it is likely that they will remain elevated for the foreseeable future.

Reversion to Trend, Expensive Words, and The Investment Graveyard

The underperformance of the TSX Composite Index vs. the S&P 500 over the past several years has been extreme from a historical perspective. As indicated by the following chart, Canadian stocks have suffered one of their worst 10-year periods of underperformance since 2000. 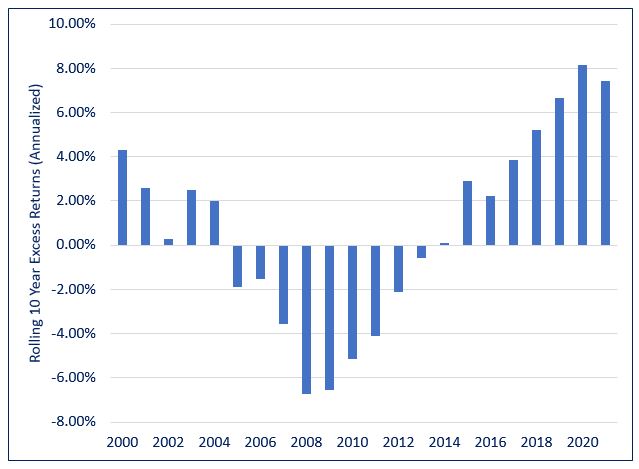 As we have previously written, reversion to trend has been one of the most defining characteristics of markets since time immemorial. Any asset class that has dramatically outperformed for many years is likely to underperform for the next several years, and vice-versa. This suggests that the TSX is likely to outperform the S&P 500 over the next several years. Whereas historical patterns may fail to recur, it is dangerous to ignore the past, and the investment graveyard is littered with the bones of new paradigms. To quote investment pioneer Sir John Templeton, “The four most expensive word in the English language are 'This time it's different.”

The notion that U.S. equities are overextended vs. their Canadian peers is also supported by the relative valuations of the TSX Composite Index vs. the S&P 500. The following graph illustrates that Canadian equities are currently trading at one of their largest discounts to their U.S. counterparts since 1994. Although relative valuations are not useful for predicting relative performance over the short term, they have historically been useful in doing so over the medium to long term. The last time the TSX Composite Index traded at a significant discount to the S&P 500 for an extended period was during the tech bubble of the late 1990s, following which Canadian stocks outperformed by 28.9% over the next five years and by 83.7% over the following 10 years. 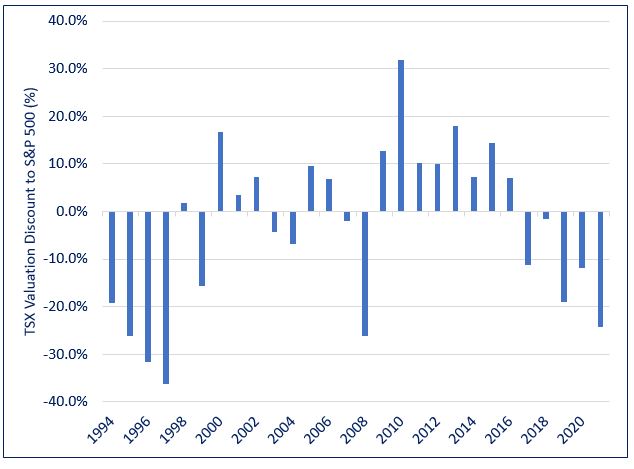 If You Like the Canada Story, We’ve Got the Goods

When it comes to investing in Canadian stocks, the Outcome Canadian Equity Income strategy has produced best in class results. Since its inception in October of 2018, it has been in the top 1% of all funds according to the most recent S&P Index vs. Active Canada Scorecard, returning a cumulative 54.0%, as compared to 47.6% for the TSX Composite Index and 46.4% for the TSX Dividend Aristocrats Index. Notably, the fund has achieved these results while exhibiting lower volatility and shallower losses during challenging environments.