Cycles are inevitable. They have persisted since markets have existed and will endure for as long as humans engage in the pursuit of profit. In prolonged up cycles, people are euphoric, bid up prices to unsustainable levels, and sow the seeds for subsequent misery. Similarly, severe price declines result in unsustainably pessimistic sentiment, pushing prices down to bargain levels, thereby sowing the seeds of the next up cycle.

Neither bull nor bear markets continue indefinitely. Despite this incontrovertible truth, every time an up or down cycle persists for an extended period and/or to a great extreme, the “this time it’s different” crowd becomes increasingly pervasive, citing changes in geopolitics, institutions, technology, and behavior that render the old rules obsolete. But then it turns out that the old rules do apply, and the cycle resumes.

The persistence of cycles is in large part the result of the inability of investors to remember the past. According to legendary economist John Kenneth Galbraith:

“Extreme brevity of financial memory…. When the same or closely similar circumstances occur again, sometime in only a few years, they are hailed by a new, often youthful, and always supremely self-confident generation as a brilliantly innovative discovery in the financial and larger economic world. There can be few fields of human endeavor in which history counts for so little as in the world of finance. Past experience, to the extent that it is part of memory at all, is dismissed as the primitive refuge of those who do not have the insight to appreciate the incredible wonders of the present.”

Will the True Driver of Market Cycles Please Stand Up?

Without a doubt, macroeconomic factors such as interest rates, inflation, fiscal policy, GDP growth, unemployment, etc. exert a significant influence on the ebb and flow of markets. However, in our view, fluctuations in psychology have the greatest impact on cycles. More than any other factor, changes in sentiment are what cause shifts between hospitable to treacherous markets, and therefore between gains and losses.

In market cycles, most excesses on the upside and the inevitable reactions to the downside (which also tend to overshoot) are the result of exaggerated swings of the pendulum of psychology. Even the father of value investing and Buffet mentor, Benjamin Graham, acknowledged the tremendous influence of psychology in his allegory about “Mr. Market”. Depending on his volatile mood swings, Mr. Market will buy assets at unrealistically high levels or sell them at bargain basement prices.

The following graph offers a succinct and accurate portrayal of investor psychology at different parts of the cycle. 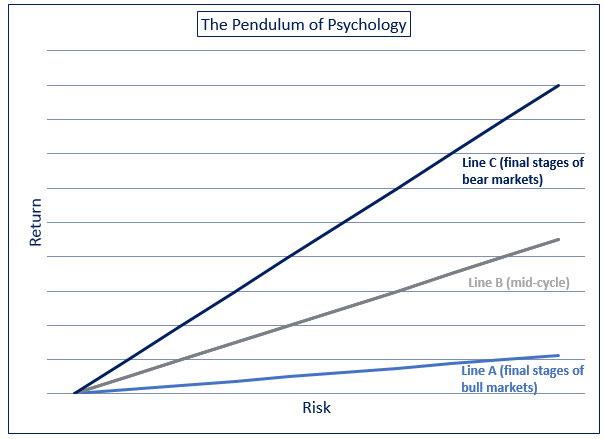 In bear markets, the dominant psychology in the markets is represented by line C, where investors demand generous risk premiums to compensate them for taking risk. In these environments, valuations are undemanding, prospective returns from bearing risk are high, and chances are good you that will be rewarded for taking risk.

As the cycle progresses and markets begin to rise, the dominant psychology shifts to line B, which represents the “happy medium” where investors are neither overly pessimistic nor blindly optimistic. In such environments, people require adequate compensation for taking risk, valuations are neither depressed nor excessive, and you can expect returns that approximate the long-term historical average.

Lastly, during the latter stages of bull markets when prices have risen significantly over a period of several years, the general mindset of the investing public shifts to line A, where investors become euphoric and adopt a lopsided desire for return with little regard for risk. In such environments, people require scant compensation for bearing risk, valuations become unrealistic, and losses become more likely than gains.

In essence, the pendulum of investor psychology is heavily influenced by the recency bias of what has happened over the past several years, swinging between collecting gold bars in front of a wisp during the bad times (line C) and picking up pennies in front of a steamroller at market tops (line A).

The table above demonstrates that the mood shifts of investors can have a dramatic impact on returns. With respect to the current environment, we are more confident about where we are not than where we are. It’s difficult to make the case that market participants are despondent and are demanding huge risk premiums for investing. In our view, market psychology is currently somewhere between lines A and B.

Except for the short lived Covid-induced swoon of early 2020, governments and central banks have been successful in maintaining the bull market that began in March 2009 after the global financial crisis. This has increased confidence in the Fed put and emboldened investors. Although nobody can know for certain whether it is possible to engineer a perpetual party by plying its attendees with ever-increasing stimulus, we wouldn’t bet the farm on it!

In the real world, things generally fluctuate between “pretty good” and “not so hot.” But in the world of investing, investor psychology seems to spend much more time at the extremes (lines A and C) than it does at a “happy medium” (line B). At any given point in time, markets are more likely driven by greed or fear rather than greed and fear. Either “Risk is my friend. I need to buy before I miss out” or “I just don’t want to lose any more. Sell before it goes to zero” are far more likely to dominate markets than equanimity.

It’s Not About the Facts, It’s About Interpretation: Beauty Is in the Eye of the Beholder

Regardless of information type (economic, company-specific, etc.), it’s not the data itself but rather how it's interpreted that determines how it impacts markets. Depending on the mood of investors, the very same information can cause vastly different outcomes.

When investors have been making money, psychology is positive and risk aversion is scarce. In such environments, everything is interpreted favorably, and negative developments tend to be ignored. Conversely, when people have been suffering losses, investors are pessimistic, and risk becomes a proverbial “four letter word”. Unpleasant events are emphasized and positive ones are ignored. The following cartoon provides a humorous yet accurate depiction of how fluctuations in market psychology have a profound effect on the interpretation of events, and by extension on the effect that events have on markets. 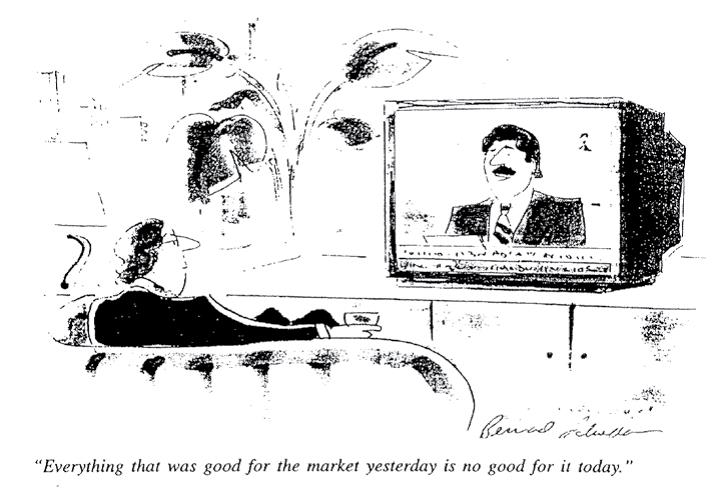 Agnosticism is Better than Self-Delusion

Since changes in investor psychology are the dominant force behind changes in the investment environment, then macroeconomic analysis is of limited use in terms of its ability to achieve superior investment results.

We are not saying that macro developments are not influential, but rather that future macro developments simply aren’t knowable. We have written ad nauseum about the folies of macroeconomic forecasting. There is no shortage of evidence demonstrating that expert predictions have on average demonstrated no more accuracy than throwing darts blindfolded.

In each December since 2000, the median Wall Street forecast has never called for a stock market decline in the following year, and yet the market fell in six of those years. Moreover, since these forecasts never stray materially from the market’s long-term historical average return, they tend to be least accurate when accuracy would have been most profitable! When it comes to investing based on forecasting, it’s hard to argue that agnosticism isn’t better than self-delusion!

According to Galbraith, “All these people see the same data, read the same material, and spend their time trying to guess what each other is going to say. [Their forecasts] will always be moderately right – and almost never of much use…. We have two classes of forecasters: those who don’t know – and those who don’t know they don’t know.”

Forget About Certainty. It’s About Tendencies

The fact that cycles have a tremendous effect on markets yet cannot be predicted with any reasonable degree of accuracy seems to leave investors in a hopeless predicament. However, just because you can’t predict does not mean that you can’t prepare. Like anyone else, successful investors don’t know what the future holds, but they do have a better understanding of future tendencies, which they use to tilt the odds in their favor and achieve superior results over the long-term.

As an example, take a jar containing 100 marbles, of which some are black and some are white. If you don’t know anything about the number of black vs. white marbles in the jar, then you have no “edge” in betting which color is more likely to come up. Rather, you’re just depending on luck (which is not a sound nor a profitable strategy). However, if you know that there are more black than white balls, this knowledge will allow you to win more often than you lose.

At their core, all the Outcome strategies are based on ascertaining odds and tendencies. We use big data analysis and machine learning to identify and analyze historical patterns, to ascertain whether they seem to be repeating, and if so, what actions should be taken. This approach applies to all our mandates, whether determining the asset mixes of our Global Tactical Asset Allocation or Country Rotation strategies or the individual stocks and weights in our dividend-focused Canadian Equity fund. Our strict adherence to this approach has enabled us to deliver superior risk-adjusted returns for our clients, which we believe will continue to be the case in the future.