We Don't Stand in Fields During Lightning Storms

Starting in the second half of February, financial markets plummeted in response to the onset and rapid spread of coronavirus. The speed of financial carnage has been largely unprecedented, with stocks registering some of their swiftest declines in history. As the following table illustrates, despite these gut-wrenching gyrations, both Outcome strategies succeeded in achieving their stated objectives. 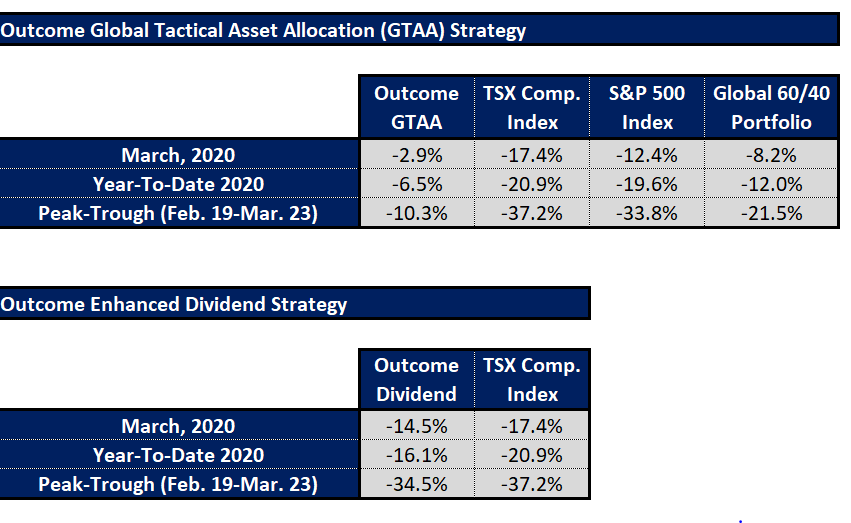 Our Global Tactical Asset Allocation strategy protected our clients from large losses. At the end of January, our machine learning-driven models began reducing equity, REIT, and high yield bond exposure in favour of the relative safety of U.S. Treasuries and high-grade bonds. By the end of February, they shifted entirely out of risk assets, except for a 10% exposure to emerging market sovereign bonds.

Our Enhanced Dividend Fund, which uses AI-based algorithms to construct portfolios of Canadian, dividend paying stocks, has outperformed both the TSX Composite Index and the TSX Dividend Aristocrats Index.

Meet the New Boss. Same as The Old Boss.

It goes without saying that nobody could have predicted the emergence of COVID, let alone the speed at which it has spread across the globe and the related impact on financial markets. However, the simple fact is the type of declines that stocks and other pro-cyclical assets experienced have happened before and will happen again.

Most investment managers follow a static approach to asset allocation. Once a suitable mix of stocks, bonds, etc. is determined, managers will typically not make any changes, regardless of whether stocks are in the midst of a rip-roaring bull market or a wealth-destroying bear market.

This “deer in headlights” approach guarantees one thing: that you will suffer large losses in bear markets. If you are invested in a typical, balanced portfolio of 60% equities and 40% bonds, and stocks experience a bear market decline of 35%-50%, you will lose a substantial amount of money, regardless of which individual stocks you own.

When in comes to security selection, professional money management is dominated by stock-pickers who use deep-dive, individual company research to identify stocks that they believe will outperform. Unfortunately, history shows that even portfolios comprised of fundamentally sound companies get crushed in bear markets.

In the postwar era, the S&P 500 Index has experienced eight bear markets, excluding the current episode. The average peak-trough loss during these declines is 38.6%. When you apply this average to the pre-pandemic peak level in the S&P 500 of 2585, the resulting target price is 2080. This represents a further decline of 19.5% from its level on March 31. Performing the same analysis using the worst peak-trough loss of 56.4% that occurred during the global financial crisis of 2008-9, you arrive at a target level of 1476, which equates to a further 42.9% loss from its March 31 level.

At the risk of sounding like a broken record, we believe that compounding is the magic of long-term investing, and that the best way to harness this magic is DON’T HAVE LARGE LOSSES. The average postwar bear market loss of 38.6% requires a 63.3% gain to recover. A loss of 56.4%, such as that experienced during the global financial crisis, requires an astounding 129.4%. Once you’ve suffered such losses, a significant part of any subsequent bull market merely involves getting your money back. Moreover, the recovery process can take several years – after the global financial crisis, it took over five years for the S&P 500 Index to regain its October 2007 peak.

All bear markets have historically come to an end, and stocks eventually recovered their losses and went on to make new highs (if this were not the case why would anyone ever invest in them?). Unfortunately, the fact is that bear market losses do permanent damage to your compounding rate.

We Don’t Stand in Fields During Lightning Storms.

In the film Trillion Dollar Bet, which documents the downfall of infamous hedge fund titan Long Term Capital Management, one critic of LTCM’s strategy stated, “If a random bolt of lightning hits you when you’re standing in the middle of the field, it feels like a random event. But if your business is to stand in random fields during lightning storms, then you should anticipate, perhaps a little more robustly, the risk you’re taking on.”

No one knows whether the worst is behind us or whether stock markets will decline another 20%. Perhaps more importantly, bear markets are a question of when rather than if. They are a permanent (and arguably necessary) feature of markets that have and will always rear their ugly heads, wreaking havoc on investors’ portfolios (not to mention their emotional well-being). If you don’t like being handcuffed to the roller-coaster without the ability to get off when the rails begin to crumble, then the current tumult in markets represents a wake-up call to rethink your strategy, goals, and risk-tolerance.

At Outcome Metric Asset Management, we don’t stand in fields during lightning storms. We rely on big data analysis and machine leaning to develop and refine investment models and decision rules. This approach does not require us to gaze into the crystal ball of the future. Importantly, our processes have protected our clients and outperformed, both during the challenging fourth quarter of 2018 and again during the current episode. We believe that this approach will enable us to continue delivering superior risk-adjusted returns over the long-term.